This was a silly idea I had a few months ago.

I planned to send it to Naa as a semi-continuation of my sending pictures of goats to her.
However, it ended up not being worked on as I slowly worked out what I wanted to do and then held off working on it due to general life events and some procrastination.

Anyway, these images show Keanu Reeves bitter and annoyed about being referred to as a wooden actor.

He was originally going to be a flat plank but I can’t draw flat planks, so instead he is either a beam or a log that has been cut back. 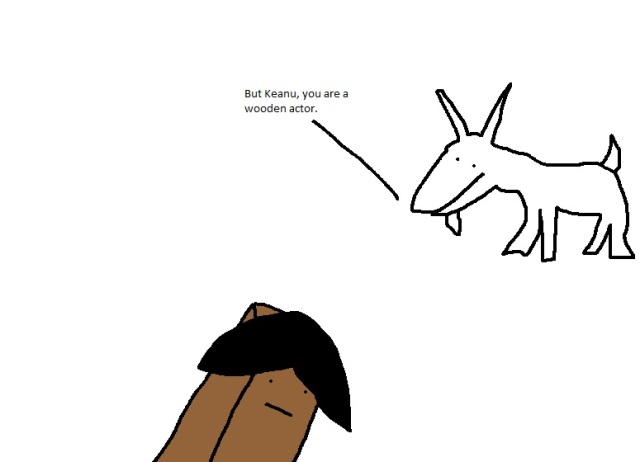 I'm some guy that does stuff. Hoping to one day fill the internet with enough insane ramblings to impress a cannibal rat ship. I do more than I probably should. I have a page called MS Paint Masterpieces that you may be interested in checking out. I also co-run Culture Eater, an online zine for covering the arts among other things. We're on Patreon!
View all posts by Stupidity Hole →
This entry was posted in Art and tagged actor, annoyed, bitter, earth, goat, Keanu, Kreanu Reeves, paint, plank, silly, wood, wooden. Bookmark the permalink.

2 Responses to Keanu Reeves is Wooden