A Giant Chicken Attacking a Zeppelin

It would probably be more accurate to say it is about to attack a zeppelin.

The idea to do make this popped into my head as my mind was wandering.

I used one of my hands as a model to draw the feet as I was unable to find any images of chicken feet at the angle I wanted.
The lightning was a suggestion from a work colleague.

Looking at this has made me realise that the zeppelin doesn’t stand a chance.

I started it in early July (somewhere around the eighth) and finished it today (I worked on it sporadically). 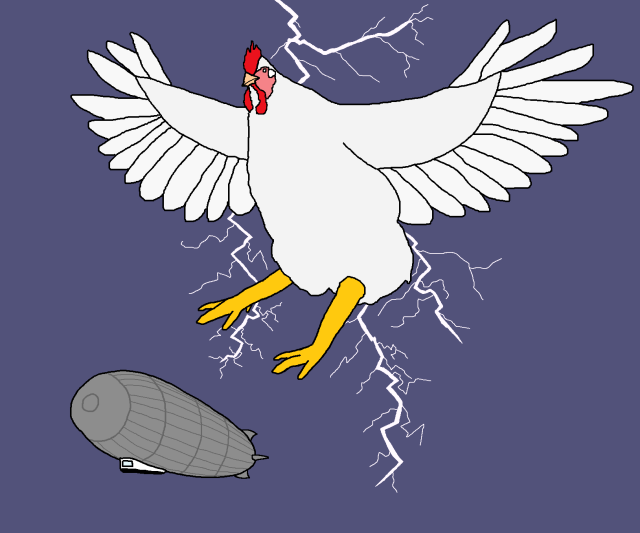 I'm some guy that does stuff. Hoping to one day fill the internet with enough insane ramblings to impress a cannibal rat ship. I do more than I probably should. I have a page called MS Paint Masterpieces that you may be interested in checking out. I also co-run Culture Eater, an online zine for covering the arts among other things. We're on Patreon!
View all posts by Stupidity Hole →
This entry was posted in Art and tagged Absurd, attack, bird, Chicken, flight, giant, Idea, Lightning, paint, wing, zeppelin. Bookmark the permalink.