Here’s a picture taken on the same day as the last one.
It was taken early into the walk.
I was lucky enough to be allowed to get close enough to get a “good” shot of this little creature.

It might’ve had to do with what seemed to be a problem with one of its wings; I’m not sure.

Grasshoppers can represent a few of the “Seasons” (the theme for this week’s photo challenge from The Daily Post).

As it is currently summer in Australia, this one was taken on a summer day that was hot at certain times.

Probably not everywhere, but for where I was, it felt hot, but that’s probably due to walking along a track with little coverage on a day that lacked clouds most of the time.

Anyway, I hope you enjoy. 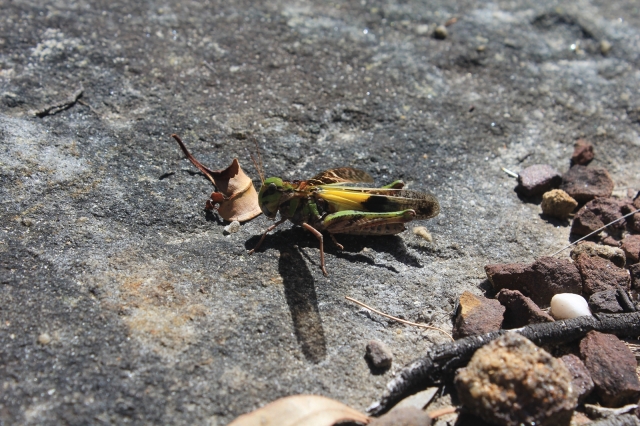 I'm some guy that does stuff. Hoping to one day fill the internet with enough insane ramblings to impress a cannibal rat ship. I do more than I probably should. I have a page called MS Paint Masterpieces that you may be interested in checking out. I also co-run Culture Eater, an online zine for covering the arts among other things. We're on Patreon!
View all posts by Stupidity Hole →
This entry was posted in Photography and tagged Australia, bush, grasshopper, locust, photo challenge, season, Summer, wing, yellow. Bookmark the permalink.