I hadn’t taken a photo of a train in a while when I took this photo last month.
It was a quick shot in a series of quick shots and a lot of it had to be cut due to my not paying enough attention to the light. Oh well.

This is my submission into the two hundred-and-ninth Lens-Artists Photo Challenge.
The theme for this one is “Surreal“.

This one is a bit of a reach as this photo doesn’t capture what I’m about to talk about well enough; I feel that there’s a sense of surrealism when you look at a train from a certain angle such as the below and see how it follows tracks because at points it looks much longer than it is and oddly curved. It looks more like it is sort of stretching along the tracks.

The host of the Lens-Artists challenges cycles weekly between the following people:

This one is guest-hosted by Tracy of Reflections of an Untidy Mind. The next is also guest-hosted and the theme has been announced in advance:

I recommend participating in the challenges. They’re enjoyable and allow room for interpretation of the theme without straying too far. If you don’t participate, then I recommend that you at least check out what others of the Lens-Artists community are submitting. 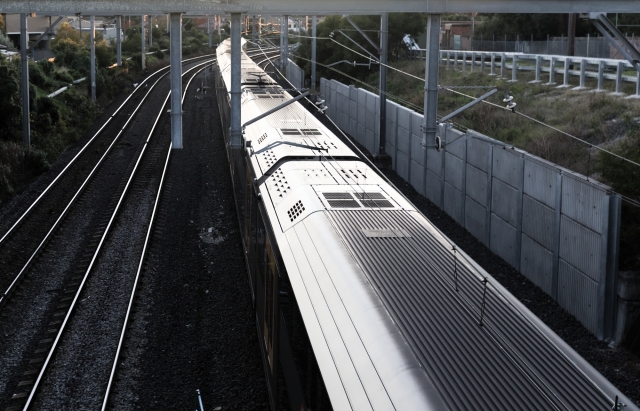 I'm some guy that does stuff. Hoping to one day fill the internet with enough insane ramblings to impress a cannibal rat ship. I do more than I probably should. I have a page called MS Paint Masterpieces that you may be interested in checking out. I also co-run Culture Eater, an online zine for covering the arts among other things. We're on Patreon!
View all posts by Stupidity Hole →
This entry was posted in Photography and tagged curve, lens-artists, long, rail, stretch, Train, transport, travel, urban, vehicle. Bookmark the permalink.